History of the Saint-Sylvestre Brewery : The last Brewery in Flanders 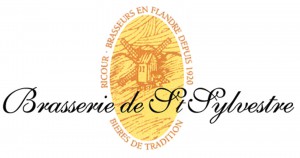 According to the archives in the Mairie of St Sylvestre Cappel, a brewery existed in the village before the Revolution. The precise date of its foundation is unknown. The hillside location was determinated by the presence of numerous freshwater springs. During the 1860s Louis Devrière acquired it from the Cordonnier family. His only daughter married Emile Dehaene (1864 – 1915) who took over the business. In 1904 his son Louis, fresh out of the Ecole des Industries Agricoles de Douai, gave a new impetus to the brewery.

In 1920 Marcel Bacquart sold the brewery to his nephew Rémy Ricour for the then sum of 400 000 francs, having taught him the business and above all the expectise necessary for the creation of fine beer. Scientific knowledge is important nowadays, but it is experience and acute observation that are the hallmarks of a good brewer.

The number of breweries is still considerable : there are several in each village, and 2 in St Sylvestre. Farmers and other workers are numerous in thios area and frequent the cafés (or “estaminets” as they are known locally), each café serving around fifty clients. The beer on tap is the main drink and local gossip will always point out where the best beer is to be found. In the past the limitations of transport meant that beer was delivered within a radius of 6 to 7 km from the brewery, avoiding the trois monts which were much too steep for a team of two horses pulling a brewer’s dray. These threee hills, equidistant from the St Sylvestre brewery, were climbed much later with the arrival of motorised transport and of bottles beer on the eve of the second world war.

In September 1939 Rémy Ricour, the grandfather of the present owners was again called up, along with fivz of the thriteen employees of the brewery. His son Pierre, then 16, replaced his fatherand worked alongsidethe remaining staff, learning every aspect of the business. After the war the brewery, still called “Brasserie Ricour Savage”, propered while many local Flemish brewers were closing down in the face of competition from the big brewers like “Motte Cordonnier”, “Breuvart”, “La grande brasserie”, “Masse Meurisse”…

In 1947, Pierre Ricour decided of his own free will to attend the “Ecole de Brasserie de Nancy”, and returned a year later full of new ideas.

In 1954 he took over the running of the brewery and began to put into effect his most cherished projects. These included :

The brewery grew in the years from 1966 to 1980. Many wholesalers were former brewers ; they made their purchases at the brewery for resale direct to the consumer, this being the only method of sale used in the north of France.

In 1983 his sons François and Serge, after attending brewing school, became budding brewers. With three brewers in the family, conversation now became relentless : we must rediscover traditional beers, distinguish between beers from Lille, Alsace and abroad. We must go beyond les trois monts. As a trial, 8000 litres of high-fermentation beer were produced and sold under the name “Bière de Mars” ; the success exceeded all expectations. 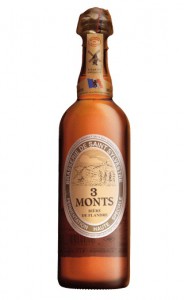 In 1985 when the brewery became a limited company, Pierre Ricour turned it over to his sons. The “3 Monts” brand was launched and by word of month has become widely popular. It spread first to La Flandre Maritime, then the Lille region ; now it is sold all over France and even in the United States, Canada, Australia and many countries in the EC.

In 1997 the “Gavroche” beer was launched. Refermented in the bottle, it relates much more to the beers of the past.

Since 1948, most of the 10 employees have come from the village or nearby. The method of brewing has remained unchanged : infusion, decoction and hopping in a copper boiler, as elaborated by three generations of masterbrewers..

More tha half the hops used are locally cultivated, especially from around the Mont des Cats. The malts from selected barley come from local malthouses.

Saint Sylvestre Cappel is an ancient village situated on a Roman military road between Cassel and Caestre. Its present name is not the original one. In the middle Ages it was called Hillewaerts Cappel and became Saint Sylvestre Cappel in 1538. From the 11th century the village belonged to the lords of Hondschoote ; towards the end of the 14th century it passed to the Maison des Hornes and thence to the Isenghien.

The commune of St Sylvestre covers 814 hectares, is situated in the Canton of Steenvoorde which is part of the Arrondissement de Dunkerque in the Département du Nord of the Nord-Pas-de-Calais Region of France.

With apopulation of around 1100 the village has become well known for its ice cream factory, the cultivation of apples and of course its beer.

The origin of beer is lost in the mists of time, but modern production only really developed in the 1930s. Flanders was notable for the number of breweries, every village possessing one or two. Beer was the only easily transportable drink along with tisane of liquorice and chicory coffee.

The development of the flemish brewery

Vanished wooden vats for fermentation after the First World War gave way to the use of metal vats in the 1930s. The bottle began to appear in the mid-thirties involving enormous investment such as the purchase of cases, bottles and the installation of a bottling plant. Around then, steam engine manufacturers developed the liquid ammonia compressor. In the face of this technical revolution many of the smaller breweries closed in the forties and fifties. The expense involved in keeping abreast of modern mechanisation has favoured the big brewing companies.

Small village brewers have either closed down or been absorbed. Of 2000 breweries at the beginning of the 20th century, only 30 remain open now, and two thirds of those are in the Nord-Pas-de-Calais. In order to survive, these small breweries specialise in traditional beers in contrast to the big boys who mass-produce for common consumption.