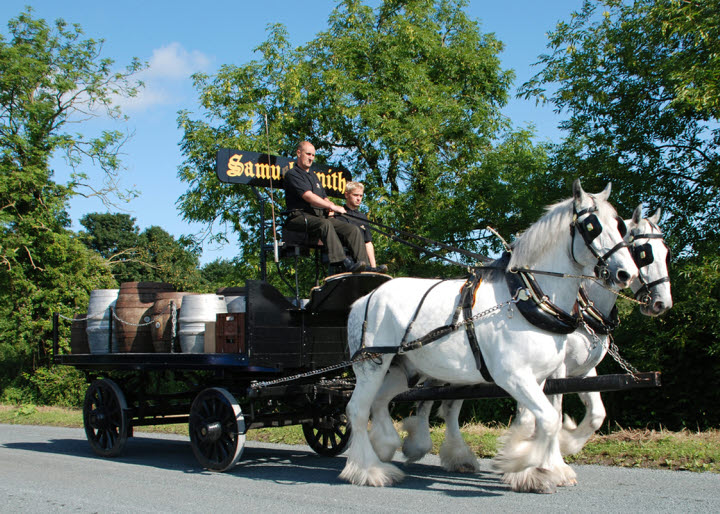 The Old Brewery at Tadcaster was established in 1758. It is Yorkshire’s oldest brewery.

Traditional methods of brewing have been retained at The Old Brewery.

The brewery still has its own cooper making and repairing all its oak casks. All Samuel Smith’s naturally conditioned draught beer is served from the wood.

The original well at The Old Brewery, sunk in 1758, is still in use, with the brewing water being drawn from 85 feet underground. Samuel Smith’s ales and stouts (except draught Sovereign and Extra Stout) are fermented in ‘stone Yorkshire squares’~ fermenting vessels made of solid slabs of slate ~ which give the beers a fuller bodied taste, using the same strain of yeast since the nineteenth century.

All Samuel Smith’s beers and ciders are suitable for a vegan diet (except cask conditioned Old Brewery Bitter and bottled Yorkshire Stingo).

The little town of Tadcaster is home to three breweries. Samuel Smith’s is a small brewery producing less than 5% of the beer brewed in the town.

The brewery operates in the region of 200 pubs. Many are small pubs situated in the post-industrial urban areas of the north of England. The pubs only stock Samuel Smith’s products.